So I’m sitting here, post panic attack, snacking on a big bag of Cinnamon Toast Crunch.  This isn’t something I normally do on a Tuesday afternoon,  but since I’ve spent the past couple hours frantically seeking and finding cancerous lumps to attach my run away anxiety to, I need a good comforting distraction.  And nothing says comforting distraction like eating crispy, sugary nutrition-less kid’s cereal straight out of the bag, without milk.

I’ve been, I don’t quite know how to describe it, humbled I suppose, by some of the blogs I’ve been reading lately.  People talking openly, insightfully, humanly, about the things that have messed them up and how they’re making their way through them.   It takes a great deal of courage to stand  symbolically naked, telling your story.  I know that, because I don’t do it very often.  But when I chance upon someone brave enough to tell theirs and who braver still, is trying to make life better in spite of it – it, well, gives me hope.

Because sometimes in life, really shitty things happen.  And most of the time, we’re unprepared, or at least ill-prepared to deal with them.  No one teaches us important stuff like how to deal with grief, or trauma or death or loss or abuse before it happens.   Or how to tell when it’s messing us up afterwards.    And because of that, those shitty things make their way in and cause a whole bunch more trouble.

I know this, because back when I was pregnant with my first son,  people in my family started dying – dropping off like flies.   Within ten years, we had 17 funerals for family members, including both my parents.  It got to the point where we joked at funerals about who’d be next to go and when our next family ‘celebration‘ would be.   We  pushed away our pain and fear and questions with morbid jocularity, not knowing how to deal with the seeming unending loss. It wasn’t Rwanda or the Holocaust, I know,  but loss and death are loss and death no matter how it happens.

After those funerals,  we went back to our ordinary lives, where at least to me,  nothing seemed very ordinary anymore.  I think once we’ve been traumatized by something, it’s like we stand outside looking in at everyone else,  who just don’t seem to get what a dangerous and painful world this is.  Our experience no longer reflects our expectations of the world being good or at least as it should have been.  Suddenly death, specifically cancer, which I’d paid little attention to before,  stalked me with the relentlessness of a predator after vulnerable prey.

So for the next 20 years I tried to outmaneuver death.    Monitoring every lump, bump or potential health threat,  learning to expertly work the medical system for the fastest results,  in search of peace of mind.  If you ever need a seasoned medical system jumper, I’m your girl.   What began as responsible health care quickly escalated into hyper vigilant health care.  I had a large family, which spread the fearful possibility of loss beyond myself to my five small kids, who I loved, and still love with everything in me.

I visited doctor after doctor at the first sign of anything wrong,  seeking assurance that things were ok.  I suspected as I regularly walked in, 5 kids in tow, the  doctor’s office would collectively sigh, ‘oh great, here comes cancer check woman again’.  However that embarrassment was worth the tentative relief.   Tentative, because as soon as one concern was resolved, another would follow immediately after.   It was as exhausting and terrifying as it was useless.

What I didn’t realize with all my medical maneuvering, was that I was literally hard wiring a dysfunctional coping system into my brain.   One that demanded a specific set of actions to manage anxiety and ambiguity; one that became more demanding and deeply ingrained over time.  Prozac couldn’t touch it.  Neither could Ativan,  religion, self-help, community or Growers Berry Cider.  And god knows I tried.

What eventually helped was a combination of  cognitive behavioral  therapy and simply talking out the difficult things that had happened in life.  For me, it was unwinding the impact of religion, relationships and loss. They say that by 40, most of us have been traumatized by one thing or another. And for some of us unfortunately, it happens a lot earlier and is far worse.   It leaves us looking about at a seemingly functioning population,  feeling like we’re the  only anomaly struggling with life, separated from the norm, because of our experience and difficulty coping.  The reality is that we all struggle, though some more than others. Struggle is an inevitable part of life.  But there are better, more functional ways to struggle that still leave room for hope, happiness and growth.

Real change takes a long time and a lot of practice.  Changing a dysfunctional coping mechanism is almost as hard as enduring one.  I envision it like learning to walk again after a stroke.  It takes way more effort and concentration to relearn a skill after damage.  However, the brain has amazing adaptive capability and with enough commitment, effort, time and support – it literally is possible to rewire and alter the physiology of the brain.  And that’s science, not opinion.

A good thing about looking at change as brain rewiring is that when inevitable ‘fall downs’ happen, I view them as a technological glitches, not a personal failures.  Of course there are always things to improve upon, but I can nearly always trace returning to old coping mechanisms back to their roots now.  Or to stress, lack of self-care, distortions or triggers.  Which makes returning to equilibrium faster and less painful.  I don’t feel as weak, stupid or dysfunctional and I can forgive myself for stumbling when I understand my personal whys and know how change direction.

But it still happens, often when I’m not expecting it.  Like this afternoon – when I didn’t consciously realize it was the anniversary of both my dad’s death and birth until I  found myself wrestling with unnamed dread and anxiety and checking for cancer.   My dad was a measured and meticulous  man, an accountant, so the beginning and ending of his life falling on the same day of year almost seemed like a cosmic joke.  I have yet to have an April 9th pass without an emotional glitch.  Or a July 1st, which marks the birthday of my first son and the death of my mom.  But it’s still a cognitive distortion to attach fear or anxiety to certain dates – one I’m determined to manage better next round.  It’s also a distortion to fear every health concern is cancer, or that death is bigger than life.

I like the Japanese proverb ‘fall down seven times, get up eight.’  Or more, if necessary.  It’s not the falling that’s important, it’s the getting up afterwards.

So here’s to everyone fighting their way back up.  I applaud you. 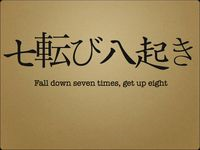